A little bit of knitting

I really haven’t done much knitting or crocheting this week but here’s what I have done.

Not quite another little aran baby cardigan and yes this one has has a boo boo in the cabling but you know what I did… I’m ashamed to say that I did repeated the boo boo so that it looked like the design rather than undo the front.

This is the start of a pram/cot (crib) blanket.  It’s supposed to be knit on double pointed needles (dpns) but as I’m sure  I’ve said before I don’t really do them.  I think it’s because I’m a tucker ie, I tuck my working needle under my right arm.  I’ve tried long dpns that can be tucked but it’s still too slow, I just can’t get a rhythm going and the thought of starting with 120 stitches but finishing with about ten split between three needles – urghhhh!  So I decided to adapt it so I could use two.  The first one worked fine but I went wrong with the second darker blue one and had to undo it.  Well I say undo I’d sewn it up so neatly the end was well hidden so I took a pair of scissors to it! 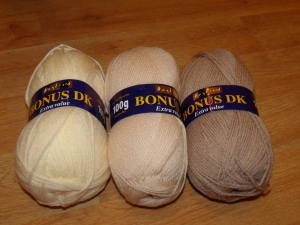 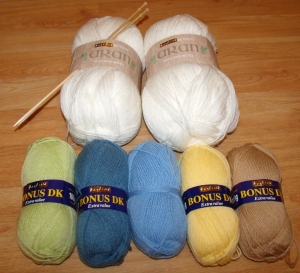 along with a ball of red and green waiting at my local yarn shop!  Better get my finger out.

I have had a thought which might help enthusiasm matters – I generally feel better later in the day from early evening so I thought I’d try and take my Thalidomide earlier tonight (I went with 8 pm) and see if that made a difference to when I perked up tomorrow.  It’s worth a go.

Other creative spaces can be seen here.

8 responses to “A little bit of knitting”