My back pain and I reached an amicable understanding recently. I’d give it copious amounts of paracetamol and Tramadol along with not doing anything to knowingly upset it and it would, for quite large areas of time, generally leave me alone. Of course spending nearly two weeks on holiday in the Royal made it easier for me to uphold my side of the bargain as there’s not really much I can get up to in hospital that would cause it to complain – as long as I take the painkillers that is. I tried to reduce them during my stay in February and ended up aching.

Its surprising how quickly you can get use to being ‘comfortable’ and how quickly you take it for granted and how you only realise this when you do something to contravene the peace treaty and give the back pain cause to complain. In this particular instance I did something that I didn’t even consider would result in a protest – I decided I wanted a tighter tush.

When I wash my hands before doing the peritoneal dialysis (PD) fluid exchange I need to count to 10 or 20 while doing various things. On Saturday I thought I could take advantage of this to do some leg raises or even squats (the leg raises won out). Its not like they result in a big movement – standing on one leg and lifting the other backwards and doing the same thing with the leg bent – but do allegedly result in a shapely behind. I figured three or four times a day and in no time I’d have a behind that I’d be quite happy to have out in front.  Yet this little bit of leg lifting has upset my back pain and I may have made it a tad worse yesterday when I decided that my sewing room needed to look more like a sewing room again than a PD room.

When the initial supplies arrived I stored away from sight as much as was convenient. I realised it wouldn’t be practical to hide absolutely everything and couldn’t decide what to do with the bags of fluid. I tried putting them in one of the plastic ‘drawers’ but it turned out that Arnold Schwarzenegger would have had trouble getting it out, so I thought I’d see how it went with them. By Sunday this is how it was going… 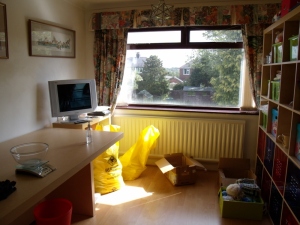 I felt I needed to tidy it up. So following a slight rearrangement of the wardrobe in that room to make space for a box of fluid it looked like this…

Better – well I think so. Now I just need to have a proper sort out of the wardrobe and the rest of the stuff stored in the room probably as I didn’t so much find a space to put one of the boxes in as make a space by moving other stuff around ie, bunging it in the glory-hole and find some sort of attractive receptacle to put my BRIGHT YELLOW waste bag in.

So after this little bit of tidying yesterday and getting tea (I mean cooking spaghetti and warming up some pre-made frozen sauce) I felt like a nap but broke one of my cardinal rules – if you feel like a sleep have one – or you’ll feel worse later. As a result of no kipping I felt quite tired today. I mean I know that I tire easily at the minute but still I didn’t take a little nappy-poo – the next PD exchange was due in half an hour so after that I thought, then B went to work and Bud wouldn’t settle possibly after having B off last week so I entertained him, a friend phoned and it was time to do another exchange before bed.

It was so nice having B at home last week so much so that when he was going to work tonight I suggested he should take his redundancy and stay home with me or rather us. The first week I was in the Royal B’s company announced that the depot would be closing by the end of the year and three smaller transit depots would be opened – at least one being closer to home – and there may be jobs available at an existing warehouse the other side of Manchester. I’d originally told B that in my opinion he should hang in there and see if he got a job in Liverpool or Warrington and if he didn’t like it he could always take his redundancy at that point.

Tea time today I read a text from an Armchair Yoga friend about a couple who are part of the group.  Mrs found out last Wednesday that her cancer was now really serious and she had a matter of months and on Thursday Mr went and had a massive heart attack and died. Seriously – WTF!

So where I’d gone from telling B to stay at work, and not just for the money but also because I think its probably good for him to mix with people where the topic of conversation doesn’t at some point touch on myeloma or dialysis, this news made me want to be totally selfish and just spend more relaxed time together.  He responded that I should be careful what I suggested as he might just do that.

Mind you that might pan out quite well since despite not having actually worked in over 12 months I am still technically employed however I received a letter last week saying that the typists were being absorbed into other areas of the business.  As I wasn’t in on the telephone conference and haven’t received anything more personal than this letter from HR I don’t know where exactly this puts me. Although this might explain why I received a form from work a few weeks ago requesting my permission for them to obtain a medical report even though it said they usually asked for one after five months.

5 responses to “Tightening your tush!”