The Great Slipper Hunt of 2011

I was hoping to be able to show you a finished shawl today but after I missed yesterday’s knitting target dramatically I took a picture today while there was still a fair amount of natural light left and abandoned any thoughts of getting to the point of weaving ends in this evening.

I ended up having to do another West knits Knitalong shawl after a friend saw the first one and said ‘I’ll have one of these for Christmas in white, grey and black if you can manage it.  It will be ideal rather than a cardy.’ To which I responded ‘Okay then.’ While thinking ‘DOH!’  You see said friend hardly ever asks me to knit, sew, crochet anything even though I’ve offered loads of times – thinking about it maybe she just doesn’t trust my crafting skills – I think things she’s asked for, rather than just had thrust upon her amount to a fabric pelmet and a throw.  The DOH! resulted from me having already bought her present.  A couple of months ago she accompanied me to a hospital appointment and then we did a spot of shopping in Liverpool and then, of course, went for food.  During the course of the shopping she spotted a handbag she really liked and I was able to buy it a few days later from the local version of the same shop.  ‘What a result’ I thought at the time – with the starting of a sense of smugness at getting ahead with Christmas presents.  Anyhoo needless to say I couldn’t/didn’t say no and bought the yarn last Saturday.

As I avoid circular needles at all costs I am, once again, knitting this one on straight needles so it’s not exactly photogenic.  Actually it’s not clear in the flesh, so to speak, two friends called round last night and one isn’t a knitter at all and couldn’t grasp how what went where at all – so I had to get the first one to explain it.  I also brought down Pyjama Bear which shows I’m feeling better than two weeks ago when I mentioned the bear but couldn’t muster the enthusiasm to go upstairs for it.

So here it is…

I didn’t meet my knitting target yesterday as we had a Buddy incident.  There I was all set to carry on with the shawl after getting a drink and getting myself comfy on the settee just after two o’clock and by half past I was putting the quilt off the settee in the washer along with Bud’s two duvet/mat covers – because I thought I might as well make the most of the wash.  This was because Bud had been out for a wee wee and come back in with a pooey paw, only slightly pooey right enough but still pooey!  And I made Bud flinch, I was shooing him out into the garage and he went onto his window mat as he thought he’d been naughty.  As he wasn’t moving quick enough I put my hand out to pull him towards me and as it passed over his head he ducked and I ended up feeling bad.  Then I thoroughly traumatised Bud by inspecting his paws and then washing the relevant one with large quantities of Dettol, copious amounts of kitchen roll and a huge, nay HUGE use of ‘It’s alright.   You’re a good boy.’  He got a doggy treat after it and I got a nap.

I wouldn’t mind but B did a poo sweep of the garden last Saturday as we got back from Auntie Ann’s on Friday to find one of B’s garage slippers was missing.  After a search of the garage and house we could only conclude it was in the garden and Bud was being no help, he refused to answer B’s question ‘Where’s my slipper?  What have you done with it?’  On Saturday I ventured out on a slipper hunt to find it was poo central in the garden.  B not having collected anything since I initially went into hospital in September, he was waiting for a frosty morning but the weather has been unseasonably mild.  So B ended up having to don a pair of latex gloves and go on a poo hunt.  What made it hilarious, er I mean worse was that it was frosty early on Sunday morning!  Hehe.

I think I can safely say I know why our broadband provider came bottom of the list in a recent customer satisfaction survey!  In fact after being unable to connect yesterday I was on the brink of ringing the national news this morning when I realised I’d missed the opportunity to vote in Kim’s Knitters’ Hunk yesterday but relented when I was in fact able to vote – I can only think it had something to do with the time difference.

So my creative space this Thursday is red, cream and blue. 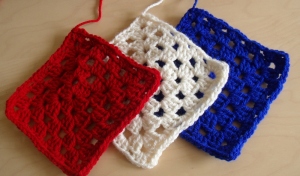 The 900g of yarn I bought last Thursday for Share a Square has been transformed into 66 6″ squares – uhh ohh ‘666’ – look like however I managed to avoid the devil by keeping my hands un-idle! 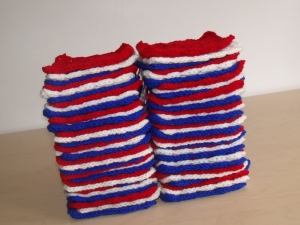 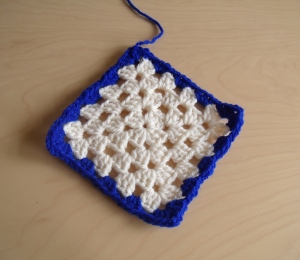 Speaking of ends, I remember last year having to undo a big tangle after the squares had been washed so this year what did I do?  I threw them in the washing machine anyway on the handwash cycle and look what I got…

Mind you, I got this after untangling them!  Has this put me off popping the next batch in the machine – of course not.  However this time I’m going to plait them to see if that makes a smaller or bigger tangle.

Yesterday I also knit clues 1 and 2 from this…

Roo mentioned it on her blog last week and I thought I’d give it a whirl. I’m unable to provide a photo of my progress but am able to show the yarns I’ve chosen to use…

Hopefully the purples won’t be too similar.
Other creative spaces can be found here.