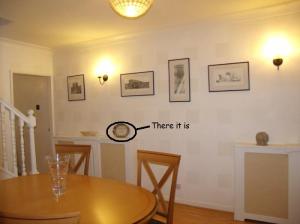 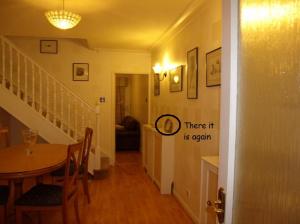 as seen entering the dining hall from the front porch and it, obviously, being fully visible when walking down the stairs or indeed in and out of the lounge I still hadn’t got round to returning it.

We had a lovely visit from Lorna and Mike last week with cupcakes and not so lovely courgettes (blahhhhhh) – actually if they’d brought three I could have entered them in the show.  Despite one being almost the size of a marrow I couldn’t pass it off as one as they apparently need to be 16 inches! Anyhoo, Lorna asked if I would be entering this year’s show and I said yes if I hadn’t been blacklisted for not returning the trophy so the co-winner could have it for the second half of the year – she had said I could keep it for the full year as she’d kept it on top of a cupboard and put stuff in it but I wasn’t convinced she meant it.  So when I called at the doctors’ today I stopped by the library too and picked up this… 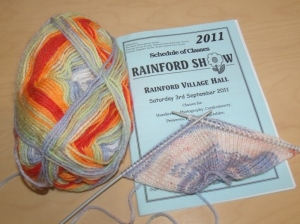 Just the book not the knitting, that came later, and I’ve phoned the lady responsible for the Domestic Section (ah yes, domestic – that’s me all over – it also includes Confectionery and Preserves) and I can return the trophy on Saturday when I drop off my entries for this year. 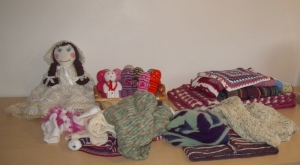 The sections I’ve decided to enter are cross stitch picture, handmade toy, knitted garment, crochet item.  There’s no limit to the number of items you can enter in the categories I’ve picked! Ohhhh I’m so excited!  I excluded scrapbook page 12″ x 12″ and handcrafted greetings card. I think I should just about find enough to enter but I have started a new handmade toy as well.  I mean there’s £2.50 at stake for first prize and the radiator cabinet looks bear without the trophy! (It’s currently undergoing a pre-award ceremony pampering session.)

Other ‘Domestic Section’ type creative spaces can be viewed here.

With regard to my trip to the GP this morning (where I babbled like a cranked up three year old rather than kept it to the point) it turns out that the area of altered sensation in my forearm relates to C7 – no worries there then as the loosening is C6 – right? Wrong I got my number wrong – I double checked my blog entry from February and indeed I had initially been told C7 but had somehow transformed that to C6 between then and now.  My GP was able to confirm it was C7 by looking at the x-ray report from February on her computer (remember the one that ‘wasn’t on file’ at the hospital on Tuesday).  So long story short (I really babbled and repeated myself) my lovely GP is faxing a letter to the Prof at the Royal today about doing an MRI on the relevant vertebra and should I get any pain or weakness in the meantime I have to contact them immediately.  She did say that the vertebra could just be irritating the nerve or it could even be a local, non-myeloma related problem round the elbow.

When I went in I said that I’d come for some peace of mind and after it all she said ‘Have I made it worse?’

The thing is she hadn’t.  If at the hospital on Tuesday they’d x-rayed my cervical spine and said ‘There’s nothing new showing, sod off and only come back next week if it’s still numb’ I would have quite merrily tottered off and enjoyed a good night’s sleep.  But I left with doubts and I know a little knowledge is a dangerous thing and this is why I ask questions to satisfy my naturally extremely curious nature because at the end of the day I’m a typist not a hema, haemer – a blood doctor and when I do ask questions I want to receive an answer that sufficiently satisfies my enquiring mind!

What did you do with your Tuesday?

‘Ohh, sounds nice.  Gosh, I’m impressed.  You did THAT – that’s disgusting I’d keep it to yourself in future. ‘

And what did I do with my Tuesday.  Well, as there was no Armchair Yoga at the local hospital I decided to take myself off to the Royal for a couple of x-rays and blood tests as I’d been a tad concerned about the numb patch that had appeared on my right forearm on Sunday afternoon.  I’d waited until Tuesday as it was a bank holiday.

I rang the day unit as soon as I knew someone would be there and then went in to get it checked out.  One of our lovely neighbour chaeuffered me there – she did offer to stay but as these things can take time at the best of times and it was the day after the bank holiday I suggested she go home rather than wait.

So obviously my biggest concern was that the numbness – okay it’s not numb per se running my fingers or nails over it produces a feeling like minor pins and needles so I can feel stuff (unlike the area at the side of the scar on my knee which is completely feeling less) but not what one should usually feel – so my biggest concern about the area of altered sensation was that it was being caused by some shift in the loosening found in my C6 vertebra in February this year.

So after mentioning this to the doctor (who I’d never clapped eyes on before and who I did initially see very soon after arriving) and also mentioning that on Saturday when I had a headache I’d got a pain in the crown of my head that wasn’t a usual headachey pain and which was still there slightly and indeed had been then when I’d had a headache a few weeks ago.  (I had intended on mentioning it at my next clinic appointment).  Now maybe this was too much and I appeared to be a whinger particularly as when she asked if that was it I said ‘Well I had been getting a pain in my leg but think that may have been my new walking boots’.

So after two x-rays, some blood tests and starting and knitting most of this… 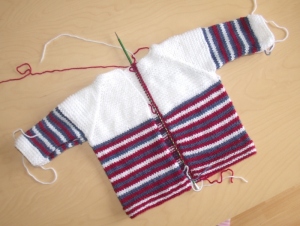 The conclusion was that the blood tests were fine and showed no magnesium/calcium issues, x-rays showed nothing new and the head pain was unrelated to myeloma as it wouldn’t come and go.  If the ‘numbness’ hadn’t gone in a week I could go back and they would run an MRI which would pick up any smaller damage.

So I toddled off home on the train.  I would like to say I toddled off happy and satisfied but the more I thought about it on the way home the less happy I was.

The x-rays were on my lumbar and thoracic spine regions and after looking at my previous x-rays ‘which were taken at Whiston but were on the file there…’ When I said the latest had been taken at the Royal in February – I was told the report wasn’t on my file.  This is the x-ray that showed the new damage at C6 – maybe this is why a cervical spine x-ray wasn’t taken because at the x-rays in April 09 there was no damage there.

When I asked which vertebra would cause ‘numbness’ I was told ‘one higher up.’  Hello – C6!  Did I not say C6?  I think I may have done several times –  but with hindsight if there was no damage on the x-rays they looked then why do one on that area – I must have been mistaken.

And the head pain – well apparently she had told the senior doctor everything I’d said and he (name of someone I didn’t know) had said it didn’t count as it ‘wouldn’t come and go’.  In my own personal experience with myeloma pain my back pain started in January 08 and disappeared (apart from if I attempted deadlifts or reverse crunches but happily withstood carrying boxes and boxes of files upstairs) until May 08.

After due consideration, a bit of a rant when I got home (the five minutes of nerve and vertebra talk resulting in B going all hot and having to sit down) and following a suggestion from a friend (who I keep telling that our GPs are wonderful whenever she complains after theirs) I rang the surgery this morning and booked an appointment for tomorrow with them so that I can fully understand what vertebra affects what nerves before I ring one of the consultants at the Royal and make a complete boob of myself.

Said friend also suggested that a lot of patients don’t want the level of detail I do and may have been quite happy to leave with the information supplied.

And now I’m off to a funeral of an old boss – along with two other friends one of whom had mentioned my ‘numbness’ to a friend of hers who is a retired physio and she then pointed out on the forearm the various areas affected by the cervical vertebra.  But hey, we’re having takeaway for tea after back at ours so it’s not all bad!

Exercise, Nutrition & Needles – not sewing ones

I ordered an exercise bike on Thursday which arrived on Saturday. Last night I unpacked it and the very last bit I got out which was the main part looked like it had been charged by a rhino. The company are sending me a new casing and in the meantime I’m going to put the rest of it together to see if it works because I need to get this fat shifting.

I have received from the nurse at Myeloma UK a couple of leaflets on stretching and strengthening exercises for people with Myeloma. They are really good but a little basic compared to the Oxygen magazine I subscribe too but then I thought well they were probably originally designed with an older age group in mind and I need to consider my collapsed vertebra (just the one fortunately) so maybe no handstands yet. The professor we meet re the stem cell transplant said no lower body exercises, that walking or cycling should be enough but I really liked doing squats and I don’t think I’m yet ready to part with my 7ft barbell. Don’t tell hubby I’m even thinking about the barbell.

I’ve started going back to an acupuncturist. I went when my back problem was thought to be muscular. And am going to try eating from a ‘Traditional Chinese Food Energetics’ viewpoint to improve my overall health. We had a very nice lamb dish yesterday which would benefit my Qi, Blood, Spleen and Kidney. I’m not going to even pretend I know how it works but apparently it does (10 squillion Chinese can’t be wrong).

When I fell off my bike two years ago and needed nine stitches under my knee we were chatting with the orthopaedic surgeon who stitched me up (Eleanor). (The A&E doctor wouldn’t do it and wanted someone from plastics obviously thinking I had very attractive knees.) Anyway whilst we were chatting we got onto the subject of alternative therapies and Eleanor was saying that acupuncture is one that western medicine has proven scientifically to work but doesn’t know how. So that’s good enough for me.

I also need to eat better because I am becoming a small round pudding. I got on the scales last night and I am 64kg. I have bought (on ebay auction) a dress mannequin to photograph my seductively draped scarves on for my etsy shop and also to make clothes. I did not get an adjustable one but a fixed one – 36 26 36 because they look better and are cheaper AND as I am currently (I can’t believe I am going to put my current measurements in hard print but figure it will shame me into action) 39.5 34 39!!!!!!!!!!!!!!!!!!!!!