We have a fully stuff flushable toilet! And the shower tray/enclosure didn’t have to come out to do it.  Unlike normal mornings when I get up before B comes to bed this morning of course B got in bed and I turned over for five more minutes while I came round only to hear a van pull up outside the house.  Doh!

The original installer of the shower tray and toilet (someone else did the bath and basin) no longer worked for the company.  The young chap this morning put a hole in the wall and fixed it through that. 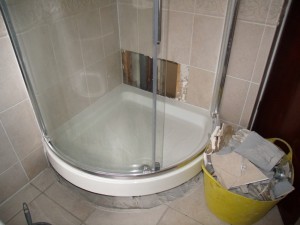 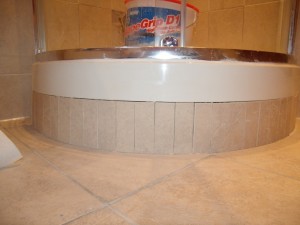 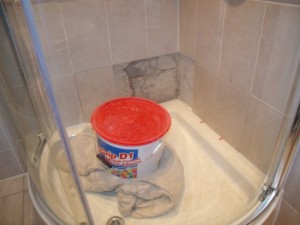 However some of the plaster came off so a plumber has to come back in the morning to plaster.  Yes, they can do small areas, B queried it.  And the tilers will come back tomorrow afternoon to pop in the missing tiles and grout.  It was either this or next Tuesday.  Since the shower would obviously be unusable during this period we settled for tomorrow.

Having it finished tomorrow however provided us with a bit of a dilemma.  Cycle three starts tomorrow and includes a clinic appointment and it will be the first time ever that B hasn’t been with me to an actual see a doctor appointment. Obviously I saw the docs on my own during my surprise holiday in February and declined their offer of speaking to my family when things were pointing in the direction of the myeloma staging a comeback tour but I’m really disappointed and this really surprises me.

I was only saying to a fellow patient I met at the hospital but saw at the Blood Support Group on Tuesday night about B and the questions he asks and apparently it’s not just B, her husband does it too but it would appear that I like him being there anyway.

Oh, and the other thing is that at the last but one and two appointments B has asked about my paraprotein level and the last but one doctor said ‘What the hell lets measure it next time.  Its a little earlier than we would normally check so don’t put too much store by it but overall your blood counts are looking better and you feel well’ – bit of paraphrasing there.  So last time we went they took a sample for measuring and we, I mean, I find out tomorrow and the agreement between the doctor and myself was that if it had stayed the same or gone up it was B’s fault for asking so much – as he did last time we went.  Both the doctor and I explained that ‘Yes it was being ‘measured’ that day but WE would only find out the results in a week’.

Oh, oh and yet another thing – who am I going to go for a mocha and an Eccles cake with while we I wait and wait to be seen in the clinic – as some of us know it’s not so much a guaranteed appointment time as a raffle.  AND what about my Friday lunch out – ARGHHHHHHHHHHHHH!

AND last thing I promise – as it my week hasn’t been crappy enough (boom boom), wait I guess it’s actually been very uncrappy (thank goodness for medication related constipation) I had to speak to the mother in law today.  DOUBLE ARGHHHHHHHHHHHHH!

Two new engineers came out today and according to the ‘Time/Quality Acceptance Note’ were on site half an hour although to me it felt more like three weeks.

All sorts of things were stuck in all sorts of places, there was a ton of shouting from the bathroom to the drive and all the usual tests weren’t showing up the problem which I figured out for myself when I overheard one of them sigh and say ‘Oh, God!’.  So after one of the engineers had took a ‘Kalm’ or had a lie down in the back of the van when he found out from the office that there was no charge for this work the toilet came out again (I’m sure there’s some joke there about water closets and coming out but for the life of me I can’t come up with it).

Let me tell you there are some things you don’t want to see on a screen in your bathroom when the CCTV camera end is stuck down one of your pipes and the engineer is giving you a ‘this is what it should look like and this is what it actually looks like’ walk-through of your soil pipe.  However we now know exactly what the problem is and how it can be sorted and it won’t entail taking up the tiled bathroom floor or taking down the kitchen ceiling, both of which were tabled twice this week.

‘We found the shower waste pipe is protruding 4″ into drain – this needs work A.S.A.P’

The bathroom installers are calling out tomorrow presumably to take out the shower enclosure and tray and adjust the waste pipe.  Fortunately we have spare tiles and I have orange knitting to keep me occupied.

I was going to bore you all with more of our toilet exploits but after sitting down to type it Bud wouldn’t let me.  So instead I shall enlighten you with ways to entertain your dog and yourself – well, I think Bud would be more likely to say yourself.

Bud was feeling quite hard done by this morning because he had to wait until the plumber had gone before getting the walk he was not so subtly requesting.  I think he felt he should be rewarded for being a little trooper yesterday after I had a toilet meltdown.  Actually it wasn’t so much the toilet leaking over the kitchen, which got cleared up and disinfected, or not being able to use it AGAIN as the ringing up and having a conversation over this with Dyno-rod.  It wasn’t so much the straw that broke the camel’s back as the one that tipped it onto its side and it needed help getting up.

I got up yesterday and didn’t want to talk to anybody and was really teary.  (I had slept fitfully because it was hot – nothing to do with the horror film before bed). I hugged Bud and sniffled, I hugged B (who thought it was his fault) and sniffled, I watched the TV and sniffled, I thought about ringing up and sniffled, I sniffled while Bud attempted to console me by licking the back of my head – there were bits inbetween when I didn’t sniffle and by early afternoon I had knit my way through the sniffling and felt up to taking Bud out.  I hadn’t trusted myself before not to start sniffling if one of the neighbours spoke to me.  I laughed for the first time in the day just before I walked Bud at 14:00.  Whilst walking Bud I had a minor sniffle.

I’ve never had seven hours like it.  I wasn’t sad as such just teary and completely lacking in the urge to speak – Bud must have thought he had gone deaf.  First thing in the morning I would have put money on it lasting until I woke up this morning but when I walked back into the garage with Bud at 15:00 and B was stood there I gave him a smile and felt better (sorry I didn’t warn you you may need a sick bag).  I said I hadn’t phoned about the toilet and he said he was too frightened to ask in case I shouted at him.  (I had suggested on Sunday night he may like to deal with it but he hadn’t taken me up on my offer.)

B did ring up and then when the guy said he’d ring engineer 17 and get back to us B suggested I may like to take the call as he didn’t know what else to say.  By this time I couldn’t believe how I’d felt earlier and that I hadn’t just made the call myself.  As it was B didn’t need to take the call as Engineer 17 materialised at the front door shortly after resulting in a plumber calling today.

So I walked Bud this morning and then I abandoned him and went to Armchair Yoga (also abandoning the toilet which had worked fine after the plumber had tinkered with it but had become blocked again after he left – they are coming back tomorrow – I did manage to ring this time) and then went off to the Blood Support Group this evening.

Opps, I did bore you with toilet details just not the ins and outs as such.  Moving swiftly back to entertaining Bud.  After the friend I went to the group with had left I sat down to blog and Bud protested that this wasn’t the appropriate thing to do and he wanted some attention.  So I took the two pre bed treats I had in my pocket and went into the bedroom where Bud jumped onto the bed and sat down anticipating getting a biscuit.  However I hid the biscuits under the duvet and although he is really smart in other regards getting under cover by himself perplexes him.  He knew where the first treat was and attempted to pick it up through the duvet – which was really funny until I realised that he may chew through – and then he tried to paw his way through.

I then hinted that maybe he should go under the duvet – which he attempted resulting in his back legs sliding off the bed and me getting an almost disgusted look when I laughed.  He did finally find his way to this biscuit.

The second one was at the bottom of the bed and although he worked out quicker that he could just nose the duvet out of the way he did initially try to pick this one up through the cover and I cannot adequately describe how funny this looked.

I may have some explaining to do if Bud suddenly takes to stalking the duvet looking for treats but then again by weekend we may have taken to living on a camp site because I understand they have toilet blocks with lots of flushing toilets.

Plunger Wars: The Toilet Strikes Back 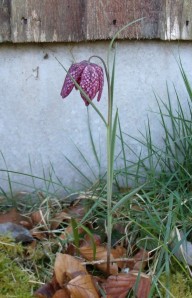 My day started with this.  A little Fritillaria. One of many I planted years ago and the first I have actually seen.  I love the little chequerboard pattern on the petals as well as the colour.

My mid afternoon entailed mopping up water after the toilet leaked through the kitchen ceiling.

My evening is going to end with a horror film (Legion) to distract me from the fact that the next four days which are appointmentless are no longer mine to do with as I pleased.