I knew I’d have to do it – maybe if it had been for me I would have fought the urge but as it wasn’t I undid the back and rectified my cabling boo boo.  Then I undid it again as I’m obviously still behind with my sleep (well that’s my excuse and I’m sticking to it) and made another boo boo when I reknit it because I couldn’t do two things at the same time – don’t tell B he readily accepts with me as a prime example that women can do 16 things at the same time whilst men can’t do one and a half.  Two of our neighbours called round yesterday afternoon and while knitting and chatting I missed another cable twist out of the new knitting.

Mind you it’s not like I need much of a distraction at the minute I also had to undo the left front twice last night and in fact somehow the right front ended up as the left front (ie, the v-neck slope was on the wrong side) and vice versa – so although the right front was ‘right’ it should have been ‘left’!

Fortunately the sleeve turned out to be a sleeve AND had the correct amount of cabling. 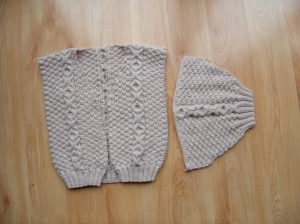 It’s not just knitting I’ve been having trouble with.  I tried a logic puzzle last weekend – just one of the simple ones at the very beginning of the puzzle book that only have three answers and with a great deal of effort I got the first one right and the second one completely wrong.  It would have been easier trying to plait fog.  I can’t say it’s got much better since.  However a friend who called round on Wednesday night said that she was glad to see I had my ‘Paula sparkle’ back as it had been a while.  I must be at my best at night as I’m pretty sure B wouldn’t say I sparkle in a morning!

And now I have some potentially very good news from the visit from the renal doctors yesterday.  Basically my kidney function is borderline for coming off dialysis.  I’m having dialysis as usual tomorrow then I get to wee into a container again for 24 hours from 6am Monday to 6am Tuesday and go in for blood tests on Tuesday but no dialysis.    It could be that the amount of dialysis can be reduced if it can’t be stopped altogether and the dialysis type changed and I could do it at home.  I have to admit the brief description of tubes in tummies didn’t exactly have me saying ‘Yay, sign me up now.’  I was home from dialysis yesterday by 12.30 as B came and picked me up.

I’m still getting the migrainy visual disturbances but fortunately no follow up headache.  In fact last  night I got the netbook out to blog and then couldn’t see the screen clearly enough – indeed it’s going funny again now.

My mouth is a teeny bit sorer which may, or may not, have something to do with Sherbet Lemons!

I would also like to point out (and I think that as I can I need to blame either disturbed sleep patterns or medication for this) that it doesn’t constitute a REAL fire unless you need to call the fire brigade – even if the flame is a foot high and it nearly makes your husband enter a state of shock.