A Clinic and A Cloche

Now if you’d said ‘Why not make a cloche?’ to me before yesterday I would have said ‘What do I want with something for plants?  I’m in no condition for gardening’.  The only cloche I was familiar with was the kind that you stuck over tender plants to keep them happy and healthy.  Little did I know that it also relates to hats and indeed cloche refers to both the hatty and the planty varieties being bell-shaped.   You may be wondering what this has to do with our clinic appointment today, well let’s start at the beginning.

Yesterday I saw this adorable pattern, The Paiyton Cloche, 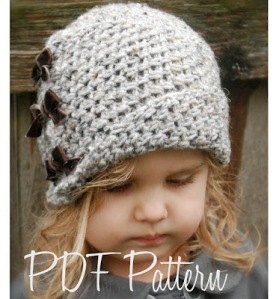 over at googie momma’s blog where she’d done a yarny round up.  I was smitten and it just what I needed – there’s also some really cute over patterns there to – I was also particularly taken with the crocheted necklace and the crocodile bootees.  However when I visited The Velvet Acorn it was sold!  I convo’ed them, it was re-listed and I bought one.

Last night when I was contemplating what knitting/crocheting to do on the way to/from and while at the clinic appointment today I thought I’d start the cloche as everything else was too big to be easily portable or too complex to chat round.

What prompted me to be looking for a toddler size hat (although it includes adult sizes in the pattern too) is that the neighbours who have been picking me up from dialysis for the past two weeks have a two year old great grand-daughter who visits quite a lot – she’s so cute and adorable herself.  Mrs Neighbour had asked for my opinion of what needles to use on a ball of wool that she’d bought in Spain (she actually brought it in when she visited me last time I on Royal-cation) as she intended to knit a toddler size hat.  I said 6mm and emailed her a link to a site that provides free patterns as I didn’t have any for aran weight hats.  She was telling me last week that she’d made one and had increased the 60 stitches instructed to 80 as it didn’t look sufficient and the hat had still turned out only big enough to fit a doll.  ‘I only had a pair of 9’s so I used them.  Would this make a difference?’  ‘If that’s the old Imperial size 9 then yes!’  (For the non-knitters a size 9 equals a metric 3.75 mm as opposed to the 6 mm that the pattern probably asked for so anything knit would turn out quite a bit smaller.)

I’m well impressed with both the pattern, which was easy to follow, and the resulting hat, I mean cloche.  It was super quick and super simple AND it turns out to be one of those items that follow this equation 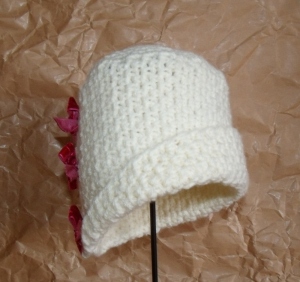 I started it on the way to the clinic and finished it after I got home from my Indian Head Massage – I could have finished it sooner but I hadn’t even looked at the pattern so didn’t realise how easy it was and didn’t have a tape measure to hand so I guessed at 18″ and when I measured it when we got home it was actually 4″ too long.

As to the clinic appointment – we had to wait for a short time as my case notes hadn’t been sent down from the ward I had my PD line installed on – so we went for a cuppa and when we got back the Prof chased them up but when they still didn’t materialise he got to prove right his quip last time when he introduced us to the new doctor saying ‘I’ve seen Paula that much I don’t need the case notes’.

I’m getting another ‘week off’, which is just as well as B took a chance and booked next week off himself at the last minute hoping that I wouldn’t be on another Royal-cation, and I need to ring the ward on Monday 2 April to see if they have a bed for me then so we can start the third (and last) DT-PACE.

To prove that even Professors are human when I said that this suited us fine as B was off next week Prof said ‘Oh, that’s good.  Are you going away?’ to which I said ‘No’ but B said ‘It’s a bit hard with dialysis’.  Prof then accused himself of being thick (especially as he’d only just confirmed what days I went for dialysis) and B actually disagreed – allegedly Mrs Prof wouldn’t have.

After a comment I made over at Lorna’s (and Mike’s) blog and although I normally do Creative Space Thursday (my creative space is filled with a couple of Myeloma Buddies I can’t show yet) I intend to herewith start Thinning Thursdays.

So every Thursday (hopefully next week along with something creative) I will pop on the post how much weight I have lost in the last week.  Feel free to lose along.  Lorna is preparing for some sort of big event – I think they may be opening a branch of Selfridges in Wolverhampton in about 18 weeks, well either that or a Home Bargain.

I on the other hand just have a lot of back side, front side and side side!  When I was telling a friend about the dentist last Friday saying I had fat cheeks she said I should have asked him how he could tell as I was sitting down.

So as I didn’t we-hay myself last week I’m going with the figure from my last blood clinic appointment even though the nurse said we could keep it between ourselves!

If you do participate you don’t have to show your actual weight if you don’t want to – you can just show how much you’ve lost!

And if you want you can do the whole Slimming World meeting thing – ‘I don’t know why I’ve put 3 pounds on I only had 6 Baileys at the weekend and they were in half pint glasses and I only ordered REGULAR fish and chips THREE nights and I didn’t eat the lemon wedge and that piece of green stuff. So I just don’t understand it.  Although I may need to change my washing up liquid as the one I squirt onto the kids’  unfinished meals to put me off eating them is actually better than my cooking.’

So in the past 4 weeks I have lost 2.8kg or 6lbs through my own hard work – WHAT!?!?  I’ll have you know it had nothing to do with indulging at Christmas so that came off easily or a stomach bug or the temporary cleansing effect of the second lot of antibiotics.

And I am not afraid to show my original weight.  It’s right there in the middle of this piece of paper…

AND Happy Birthday to B today and also to Tim, Denise’s husband!

I think personality wise they are similar in their laid back way. My Dad’s birthday was the 2nd and he took laid back to a whole new level – I must remember to tell you about the firey pan incident some time. (Handy-man wise, wait have I been censored over that?  Mmmmm – no – I just can’t say that B can’t make milky coffee and he has learned to make cheese on toast after slapping a ban on me saying he couldn’t do that.  So handy-man wise Tim has his own flooring company and B has a gutter on the garage that’s been dripping about four years and this winter the bradish came off half the shed roof – I don’t think I need to add to that.)

And many happy returns to my temperature spike, tired on Monday put down to not being over two busy days, more of less okay Tuesday night after mid afternoon dip then last night I needed an hour’s kip when I clocked off work – two friends were calling round and one wanted to know why I was in my pyjamas – I said at least I was awake.  Then this afternoon shivery, took two paracetemol because I decided not to join our little Italian/American Dr Frankenfurter in her new extreme sport.  An hour later is was 39.1 (note to self remember not to put smart ar, um aleck comments on other people’s blogs, Sean’s, about temperatures because they come back and try to bite you on the bum).  My temperature is now resting comfortably at 38.6.  I spoke to our GP’s and the Blood Day Ward at the Royal because I was scheduled to go for Zometa tomorrow.

Bascially  the lovely receptionist at the GPs said I can ring in the morning for an appointment, due to the computer she physically couldn’t book me in today for tomorrow (keep up), per the Day Ward I need to ask them to do blood counts, and check out if it’s still my ears or wherever and give me more stuff.  Then if I’m not feeling better by Monday I need to ring the Day Ward again and they will look at getting me assessed somewhere!

And because I have the common sense of a stoned lemming I had to wait until B got home to have it suggested to me that maybe it wasn’t a good idea to go to Liverpool tomorrow with my friend, Chris, anyway for lunch!

Sometimes though it’s hard to locate that fine line between seizing the carp (to quote Ruth) and having it whack you in the kisser with its damp fishy tail! Ugh!

Why I love our GPs

I called at our GP’s today to pick up my Bonefos prescription and picked up a copy of the current newsletter.  I really should get one every month.  Previous ones have dealt with suggestions about comfy seats, apparently a no, no as it might encourage patients to visit, and TV’s in the waiting area, again a no, no for the same reason!

Along with my prescription I received a copy of a thank you for some stuff I had knitted and a bag of wool – Isn’t the NHS wonderful!