While I have a bit of time on my hands I decided it was about time I shared my finished hexagonal baby blanket.  I have been unable to knit today!  {Sharp intake of breath} Don’t panic – I feel fine but my knitting is feeling decidely soggy following an unfortunate encounter with some tea this morning so it’s still drying off from its little cleansing shower.  Yesterday I have to admit no knitting got done as I was really tired and in quite a bit of pain from my right shoulder which knitting aggravated – I’m waiting on the results of yesterday’s x-ray on it.

Anyhoo back to some knitting I finished a few weeks ago.  This is Swirl and yet again is from Comfort Knitting and Crochet Afghans.

In total it measures about 74 cm (29″) across and is in double knitting yarn on size 4 mm straight needles.

When I showed pics previously Fiona enquired as to how it was constructed here we go – please excuse a the quality of a couple of the photos – I took them on my phone and can confirm that its correctly called a phone with a camera and not a camera phone.

Now it should have been knit on four double pointed needles but as I’ve said I avoid these if at all possible so adapted the pattern to suit two.

I started with one hexagon and joined the seam on that to close it up.  Then I cast on 100 stitches and picked up another 20 along one side to join the second one on.

This carried on adding 20 stitches for additional side that the new hexagon needed to join on to ie, this one had four hexagons so had 80 stitches from hexagon sides and 40 new ones…

Each hexagon had a seam that needed joining because of being knit on just two needles. 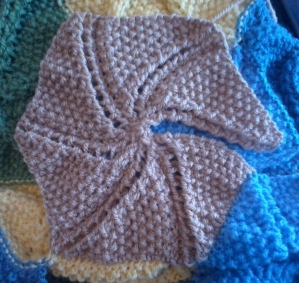 I wasn’t particularly orderly about adding hexagons possibly because I didn’t have any green to start with.

but after filling in the irratic gaps it looked like this… 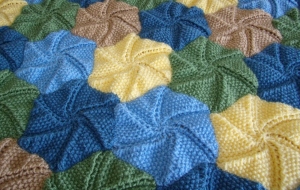 Yes its not quite flat, and not quite as noticeable in ‘real life’ but I don’t think knitting it on four needles would have made that much of a difference. 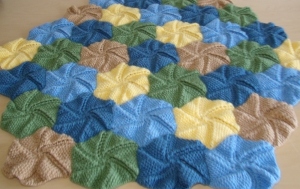 This again isn’t a pattern I would have chosen to knit or colours I would have necessarily used (the colours are similar to the ones in the book) but I am quite pleased with it and do think it would look great in really bright colours.

I started the DT-PACE IV chemotherapy today – my switch to peritoneal dialysis (PD) caused a bit of delay will things were thunk about.  I said to the blook pharmacist this morning that I believed I was causing them a problem, he agreed and said I was really testing them.  The renal doctor called to see me again for the fourth time, however its the first time I was actually ‘in’.  Tuesday with not having anything scheduled I’d been allowed out and after a trip into Primark would have come back with clothing if I’d been able to remember my credit card pin.  The third time the doc called yesterday morning I was having a shower.  The only concern he had about the schedule was that it resulted in me restarting the PD at midnight when he thought surely nine would have been better.  As it is I only got hooked up at quarter to one so by the time the bags have run through its probably going to be three o’clock Saturday morning that I need to start up again.  As you may have gathered I am being allowed to do the PD during the treatment, rather than having to go down for the haemodialysis (HD).  He must have thought that I looked way too enthusiastic having to get up at 12 even to pop a bag of fluid in but bascially I’m just estatic that I don’t have to go back to HD – and can only think he doesn’t know what sort irrate hours and late nights this can entail for inpatients – like the time I went down at ten past midnight so got back to my bed at 4.20 am!

After getting back from my non-shopping spree on Tuesday B took me out for tea – fish and chips which I had to stop eating part way through as I felt sick and got chastised for not asking for an anti-sickness tablet – I forgot!  It didn’t help that he knew I’d been sick at lunch time at the tiniest taste of Pot Noodle.

Oh, and tomorrow I get to have a biopsy needle stuck in the bump on the back of my head as the x-ray report says my skull is fine – which is good since when I was diagnosed the x-ray showed a lorra, lorra lytic lesions.  I’m think I may have to come up with a convicing ‘Silly me I forgot but I do know remember bumping it’ – depending on the size of the needle!

7 responses to “Hexagoning and Needles”