Here’s some words of advice – I don’t think I give much advice – so this must be very important.  When after months of non exercising you decide to paint the bathroom ceiling twice and then do the window frame you need to get a run up to it.  Maybe practice stepping up and down the steps for a view days and definitely two weeks of rising your hand over your head and wiggling it about.  This of course wasn’t helped by still having a sore right wrist – do you know how hard it is to do things left handed.  I’d take my hat off to you if you are left handed but I can’t manage that with my left hand!  I also find it nearly impossible to slice stuff – cheese, toast, onions.  B can manage a whole round of toast but Bud is struggling!

We are having the bathroom refitted starting Monday and ‘I’ found ‘ourselves’ in the position yesterday that we/B had not done the bathroom ceiling despite telling me that he’d take care of it.

B’s back been playing up.  He has two damaged discs and so has been getting in on my painkiller medication action.  Now the last thing I need is B off sick with his back.  Eight years ago when it started the neurosurgeon told him that if he carried on with the physical job he does he would be off once or twice a year.  Fortunately this has not happened.  We therefore need to keep him in tip top condition or we would be getting divorced.  I do not make a good nurse!  When he was off originally burned into my memory is his refusal to take tablets with orange juice whilst I was attempting to get out of the house and to go to work – ‘Can I have a glass of water!’  ‘Can’t you take them with the orange juice I just brought you with your breakfast?’ ‘No, I need a glass of water!’  ‘Mumbled something, something rude’  See I have no patience.

So in light of this and the fact that previously I did practically all the painting and therefore it would have been too much of a test on my patience to say – sand it, wipe it with this cloth, use this brush with that paint, no I’m not washing the brush do it yourself (I would point out that I don’t volunteer this information B asks), I suggested B took Buddy for a walk and I would give it a go myself.  It’s a small room and I nearly had it done by the time B and Bud got back.

I was careful and took my time and was so impressed at how I managed that I did it again when we got back from my Auntie Ann’s and stained the window frame – with wood stain!

Now this morning I have some muscle ache – my biceps, my deltoids, my gluteus maximus! – so think tomorrow I will have more muscle ache (DOMS) but it’s such a good ache and takes me back to all that exercising I used to do! 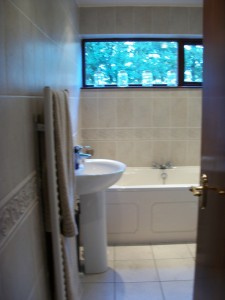 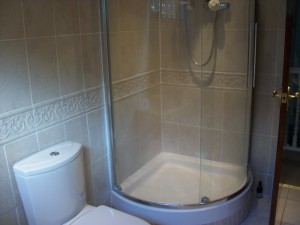 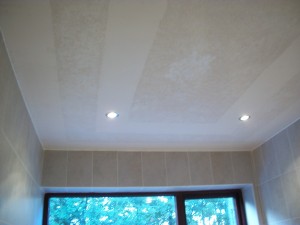 I ‘no love’ the finishing off as it was originally installed by the well known firm of Bodge It, Bugerit & Scarper.

After I accidently broke the wash hand basin a few months ago enquires turned up that not only is the style discontinued, the manufacturer no longer manufactures and then to put the top hat on it – no-one does the colour pergammon!  I love that colour but apparently I am in the minority – everyone with a white bathroom hands up – okay now hang your head in shame.  Thanks to you, and my Auntie Ann x 2, and my sister in law x 2.5 and my next door neighbour telling me/everyone that white bathrooms sell houses better – I now have to have a white bathroom suite!

We wanted a new bath too as it has become marked, I think with essential oils which just won’t come out and then B suggested we get a new toilet so that it can be used without the risk that one day one of us will end up surfing across the bathroom on the seat.  Oh and a new towel rail because it’s corroding at the bottom.  And B wanted the border tile that’s been sitting upside down for nine years replacing with one the right way up for some reason.

The bathroom installer (that had replaced the shower enclosure for us and added spots lights about four years ago) told us that he had searched high and low for pergammon for his sister in law 18 months ago because she didn’t do white either and it wasn’t a goer.

This all meant that we needed a new shower tray too, but the installer had one out the back from a discontinued style that matches ours exactly except its WHITE and we can have it for nothing except the cost of fitting it!

Now I just have to give the ceiling one final coat – gold glitter – you don’t need to look at me like that – B already did!

Oh, and WE also need to give Buddy that bath!

This entry was posted in general life and tagged bathroom, bernard, decorating, discs. Bookmark the permalink.

4 responses to “Bathrooms and DOMS”