I felt the need to share our Christmas Tree with its alternative decorations.

Necessity really is the mother of invention. A good few years ago I went to get the decorations out of the loft on Christmas Eve eve and to my horror found that the salt dough tree decorations had suffered from heat and subsequent cold exposure, worse than a pensioner in a vest. So not being able to drive and my husband being at work. I thought about the stuff I had once bought on holiday in Scotland for our bathroom and which I had never used. Thinking and subsequently reading in a Feng Shui book that sea based themes in bathrooms would disrupt the flow of pee, I mean chi. Although the former is probably even more messy.

So I popped popcorn in a pan, having bought some a while ago on the basis it was a healthy snack and then realising it was but it was also not a patch on the popcorn in the cinema or covered in toffee. But the tree did not mind that it was several years out of date.

I then threaded but was still full of enthusiasm and then draped round the tree.

Christmas Eve I glue gunned whales, dolphins, angle fish, balls (not belonging to any of the prior), mini wreaths and fishing line together along with my fingers several times. Glue and I are not on overly friendly terms.

I then had a similar gluing experience with shells of varying sizes and green thread realising that the fishing line was way to fiddly for the shells and anyway I’d already used in on the fish.

So a tradition was born… and every year since I sit and curse whilst I thread metres and metres of cream thread with popcorn then brush the escaped bits of popcorn up off the floor. This year I was actually glad to do it as with the problems I had with my back last Christmas it took be two days to finish the tree.

I do then look at it and think WOW it looks so good! And just so you can admire it too here it is. 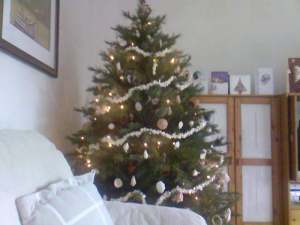 This entry was posted in Uncategorized and tagged christmas tree, popcorn, shells. Bookmark the permalink.